Click the BUY NOW button to own this rare art piece NFT! 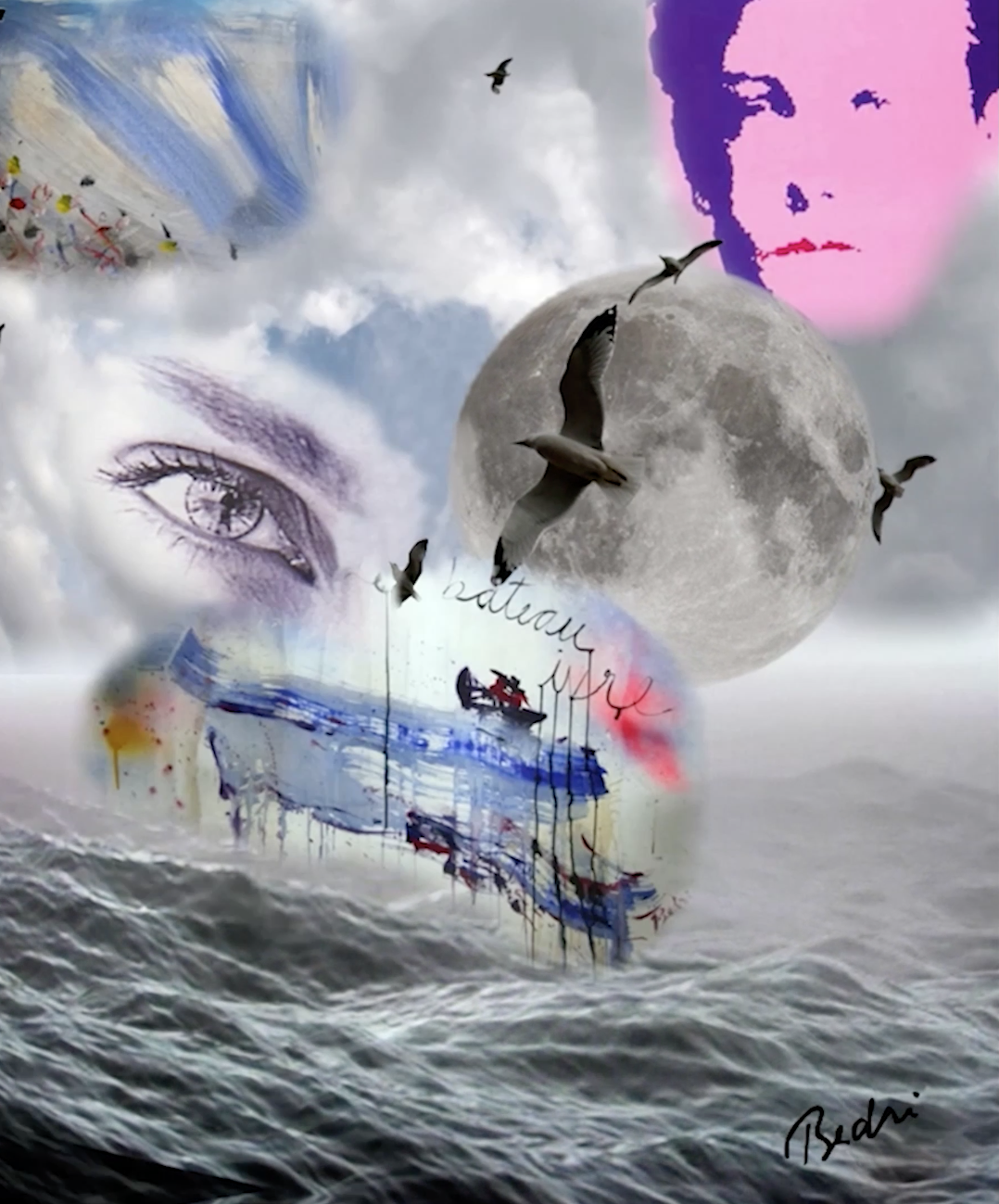 Bedri Baykam previously brought to life a masterpiece through his personal technique 4D; “The Drunken Boat”. While dreaming that his work, which he carried beyond time with the fourth dimension, would be even more unique with newly added sound and motion effects, he met the world of NFT. This new piece “Rimbaud's Drunken Boat” is ready to invite everyone to it’s magical world. If you want to be one of the lucky collectors who will acquire one of those editions,CLICK TO BUY.

I have seen the low sun spotted with mystic horrors,
Lighting up, with long violet clots,
Resembling actors of very ancient dramas,
The waves rolling far off their quivering of shutters!

Bedri Baykam is one of Turkey’s internationally most well-known artists and intellectuals. The son of politician Dr. Suphi Baykam and engineer-architect Mutahhar Baykam has had international exhibitions since the age of six until today in Bern, Geneva, New York, Washington, Paris, London, Rome, Munich, Frankfurt, Stockholm, San Francisco, Monaco, Cannes, Berlin to name a few.

He studied at the Sorbonne University in Paris from 1975 to 1980 and got MBA degree. During this time, he also studied drama in L'Actorat, Paris. He lived in California during the years 1980-1987, studied painting and filmmaking at the California College of Arts and Crafts (CCAC, now CCA) in Oakland.

He has had several shows in New York, California and Paris. He returned to Turkey in 1987 and has been living in İstanbul since.He has had 142 one-man-shows in various countries in addition to participating to numerous group shows. His works have been shown in museums and institutes such as Berlin Akademie der Künste, Barcelona Picasso Museum, Paris Roland-Garros Museum, Pinacothèque de Paris, Stedelijk Schiedam Museum in Holland, Museum der Moderne Salzburg, Osthaus Museum Hagen, Künstlerhaus Bethanien Berlin, Bahrain National Museum, Kunstverein für die Rheinlande und Westfalen, National Academy of Arts of Ukraine and in Biennales such as Cairo, Venice, İstanbul and Buenos Aires; he also showed his works at galleries world-wide, such as Daniel Templon (Paris), Stephen Wirtz (San Francisco), Yahşi Baraz (İstanbul), The Proposition (New York), Gallery Siyah Beyaz (Ankara), E.M. Donahue (New York), Galerie Kuchling (Berlin), Lavignes-Bastille (Paris), Galerie Pages (Geneva), Opera Gallery (London), Gloria Delson Contemporary Arts (Los Angeles) among others. Baykam is one of the pioneers of New-Expressionism in the early 80s and of multi-media, political art. He has directed several 16 mm films and videos and has acted in several parts in feature films.

He is the author of 31 published books, two feature film scripts and there are 51 catalogs and 8 books about his works. Baykam also became one of the graffiti artists who changed the face of New York in the 80s. Bringing the large-scale works, politics and eroticism that he has standardized since the 80s to our contemporary art scene, the artist has started to produce “4D” four-dimensional works that have attracted great attention all over the world, as an extension of his transparent layers series with digital imagery and all sorts of transparencies about which he has been working on for the last five years.

He is the co-founder and actual President of Uluslararası Plastik Sanatlar Derneği (UPSD-Turkish Plastic Arts Association) which is a member of International Association of Art (IAA) –official partner of UNESCO. Baykam was also elected as the World President of the International Association of Art at 18th General Assembly in Plzen in 2015, with his term lasting till 2022. In 2011, Baykam’s proposal for starting a World Art Day at the birthday of Leonardo da Vinci, during the 17th General Assembly of IAA World in Guadalajara/Mexico, was accepted unanimously by the participant countries. Since then, every year a growing number of artists associations in several countries are celebrating “World Art Day”, with several art forms harmoniously blending together. In 2019, UNESCO accepted the proposal brought by Baykam as World President of IAA and World Art Day became one of the International UNESCO Days.Also, Baykam has been a columnist for several Turkish publications such as Tempo, Siyah-Beyaz, Aydınlık, Akşam and OdaTv among others. He has been writing in Cumhuriyet daily in İstanbul for long years. He is one of the central characters of the artistic and political milieu in Turkey. He was a Party Assembly Member of CHP, the Turkish social democrats, in the second half of the 90s and a Presidential candidate for the same Party in 2003.The artist is the founder of Piramid Publishing (1998) and Piramid Sanat (2006-art center) in Taksim Square in Istanbul, one of the most active and independent spots in Turkish contemporary art. He has curated several group exhibitions. Baykam is married to Sibel Baykam and they have a son named Suphi Baykam (Born 1999)